We made it to an Angels Game!!

What a feat.  12 tickets purchased, 12 family members all assembled at Angels stadium.  This is a family outing that has not happened in years and years.

My family, at the party house, are huge fans of Angels baseball.  It has been a long-standing, favorite pastime of most of my family members to enjoy the games on TV, and  we also try to make it to the stadium for a game or two in a season. 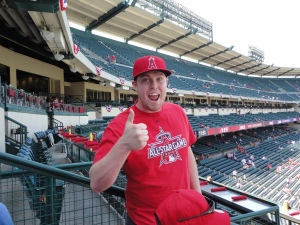 This past Saturday was one of those times.  My son, Bryan, made an extremely early trip to Angels stadium a few weeks ago to buy tickets for all of the family who could make it to the game.  This also happened to be our family’s birthday celebration day for myself, and my son-in-law.  All in all there was a group of twelve of us that made our way to the stadium for the second game of the Angels open weekend games.

This was a 1:00pm game so we were prepared to be sitting in the sun for most of the game.  We donned hats and sunglasses, slathered on sunscreen, and made sure we had our water bottles with us.  In attendance at the game were myself, Travel Man, my parents, our niece Mary, son Bryan, daughter Hilary, Evan with his parents, and my brother Jim, with his girlfriend, Elaine.  Whew!! What a group!  Here’s a shot of almost everyone. 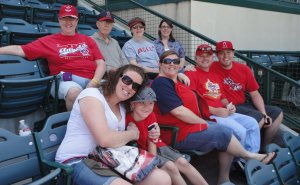 When we got to our seats we were totally in the shade for the first 3½ innings (yay!), good planning Bryan!  So we weren’t completed melted by the middle of the game!  It’s always fun going to the stadium to see the game.  The singing of our national anthem, an F-18 flyover, and the first pitch being thrown out.  Play ball!!! Singing “Take me out to the ball game”.  What a great tradition.

The Angels didn’t win this game but we had some great family time.  Evan is old enough now that he is asking questions about the game, and pays attention to the numbers on the scoreboard.  He’s our Angels fan in training.

Everyone got to have their favorite stadium treat.  Peanuts, frozen lemonades, hot dogs, and nachos.  All those treats that cost wayyyyy too much but are part of the experience.  Evan got a foam finger, and we all got fleece blankets with the Angels logo.  Really cool.  It’s so much fun to get to do a group outing like this.  I hope we get to have a few more of these over the summer.  When’s the last time you got your entire group together for an outing?